Pressure Cooking - How to Use

Getting To Know Your Pressure Cooker

Since all pressure cookers work on this same simple principle, there are few fundamental differences among them. The following diagram illustrates the basic features of most newer pressure cookers. Of course, you'll also want to study your own model and get acquainted with exactly how it works. 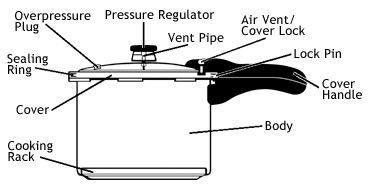 PRESSURE REGULATOR
Controls and maintains pressure inside the cooker and indicates when the ideal cooking pressure - usually 15 pounds - is reached. It’s important to understand what a “slow, steady rocking motion” looks and sounds like when using your Presto® Pressure Cooker. Always maintain a slow, steady rocking motion when pressure cooking. Losing too much steam while cooking can cause the pressure cooker to boil dry.

VENT PIPE
The pressure regulator fits on the vent pipe and allows excess pressure to be released.

AIR VENT/COVER LOCK
Automatically exhausts air and serves as a visual indicator of pressure within the cooker. When pressure begins to build, it slides up, causing the LOCK PIN to lock the cover on.

SEALING RING
Forms a pressure-tight seal between the cover and the pressure cooker body during cooking.

COOKING RACK
Holds foods out of the cooking liquid. The rack also allows several different foods to be cooked at the same time without an intermingling of flavors. When a blending of flavors is desired, the rack is not used.

COVER HANDLE
The top of the air vent/cover lock can be seen through a hole in the cover handle, enabling you to tell at a glance if there is pressure inside the unit.

These easy steps serve as a simple guide to using a pressure cooker. They are not intended, however, to be a substitute for the manufacturer's instructions which accompany your pressure cooker model.